If the copper traces behave like the skeleton of the PCB, acting as its basic structure, then the components are the vital organs. Each one has a different function. They give PCB boards the unique qualities that make it fit for its intended purpose. Depending on the device or electronic item a PCB is designed for, different components will be needed for different printed circuits boards. PCB manufacturing with components can consist of a wide range of electronic parts. Some common PCB manufacturing with components include: 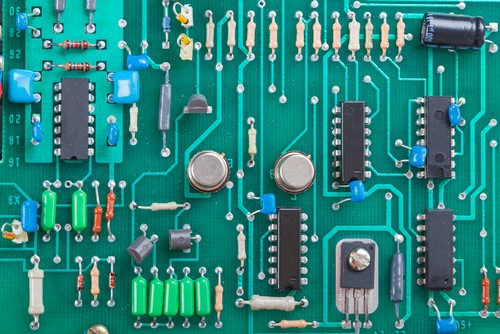 Battery: An electric battery is a device consisting of one or more electrochemical cells with external connections provided to power electrical devices such as flashlights, smartphones, and electric cars.

Resistor: A resistor is a passive two-terminal electrical component that implements electrical resistance as a circuit element.

LED: A light-emitting diode (LED) is a two-lead semiconductor light source. It is a p–n junction diode, which emits light when activated.

Transistor: A transistor is a semiconductor device used to amplify or switch electronic signals and electrical power. It is composed of semiconductor material usually with at least three terminals for connection to an external circuit.

Capacitor: A capacitor is a passive two-terminal electrical component that stores electrical energy in an electric field. The effect of a capacitor is known as capacitance.

Inductor: An inductor, also called a coil or reactor, is a passive two-terminal electrical component that stores electrical energy in a magnetic field when electric current is flowing through it.

Switch: It can allow the current to pass through or not, depending on whether they are closed or open.