In the past ten years, electronic application technology developed a lot, which led to the high requirements of PCBs. These requirements include low weight, high speed, miniaturization and multifunction. All of these result in the popularity of multilayer PCB, like 4 layer PCB, 6 layer PCB and 8 layer PCB. For multilayer PCB, the stack-up plays an important role on its function. Because good multilayers stack-up helps to build better EMC performance product. Here I would like to introduce some useful information of stack-up of 8 layers PCB prototype.

The following is an example of 8 layer PCB stackup. 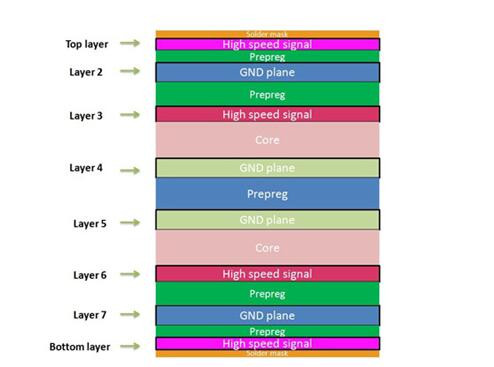 In order to make the 8 layers PCB works well with good EMC performance, every signal layer should be followed by a balance structure, such as power plane or ground plane. Besides this, the space between every layer should be taken seriously as well, especially the trace space between signal layer and ground plane. Small spacing can ensure bigger coupling capacity. One of the suggested stack-up of 8 layers PCB prototype is: signal 1---ground plane---signal 2---power plane---ground plane---signal 3---ground---signal4.

From the above information, we realize the importance of stack-up. Just keep in mind that the stack-up of 8 layers PCB prototype should be decided seriously.