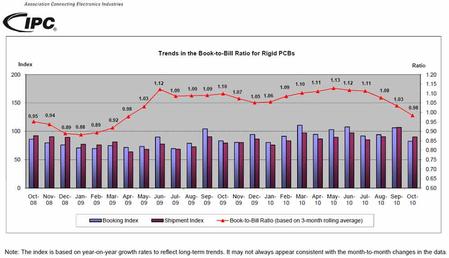 Trends in the Book-to-Bill Ratio for Rigid PCBs 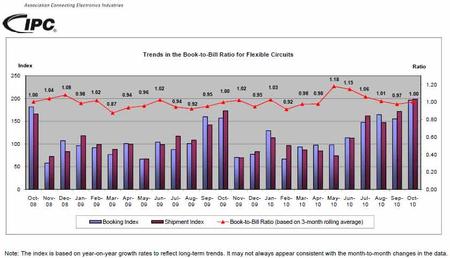 Trends in the Book-to-Bill Ratio for Flexible Circuits 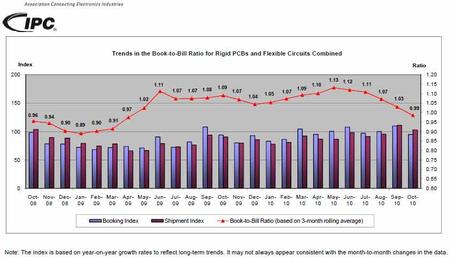 Rigid PCB shipments were up 13.6 percent while bookings decreased 2.7 percent in October 2010 from October 2009. Year to date, rigid PCB shipments were up 19.5 percent and bookings have grown 25.4 percent. Compared to the previous month, rigid PCB shipments decreased 14.3 percent and rigid bookings decreased 21.1 percent. The book-to-bill ratio for the North American rigid PCB industry in October 2010 fell below parity to 0.98.
Flexible circuit shipments in October 2010 were up 14.7 percent and bookings grew 25.2 percent compared to October 2009. Year to date, flexible circuit shipments increased 11.0 percent and bookings were up 19.4 percent. Compared to the previous month, flexible circuit shipments decreased 18.6 percent and flex bookings decreased 10.9 percent. The North American flexible circuit book-to-bill ratio in October 2010 climbed back to parity at 1.00.
For rigid PCBs and flexible circuits combined, industry shipments in October 2010 increased 13.7 percent from October 2009, as orders booked decreased 0.8 percent from October 2009. Year to date, combined industry shipments were up 18.8 percent and bookings were up 24.9 percent. Compared to the previous month, combined industry shipments for October 2010 decreased 14.7 percent and bookings decreased 20.3 percent. The combined (rigid and flex) industry book-to-bill ratio in October 2010 slipped just under parity at 0.99.
"PCB sales have continued to grow and now are back to about where they were in October 2008, just before the downturn hit the industry in North America," said IPC President & CEO Denny McGuirk. "The book-to-bill ratio has trended downward in the past five months as the growth in orders has slowed, signaling a plateau in the recovery," he added.
The book-to-bill ratios are calculated by dividing the value of orders booked over the past three months by the value of sales billed during the same period from companies in IPC’s survey sample. A ratio of more than 1.00 suggests that current demand is ahead of supply, which is a positive indicator for sales growth over the next two to three months.
Book-to-bill ratios and growth rates for rigid PCBs and flexible circuits combined are heavily affected by the rigid PCB segment. Rigid PCBs represent an estimated 89 percent of the current PCB industry in North America, according to IPC’s World PCB Production Report.
The Role of Domestic Production
IPC’s monthly survey of the North American PCB industry tracks bookings and shipments from U.S. and Canadian facilities, which provide indicators of regional demand. These numbers do not measure U.S. and Canadian PCB production. To track regional production trends, IPC asks survey participants for the percent of their reported shipments that were produced domestically (i.e., in the USA or Canada). In October 2010, 82 percent of total PCB shipments reported were domestically produced. Domestic production accounted for 82 percent of rigid PCB and 85 percent of flexible circuit shipments in October by IPC’s survey participants. These numbers are significantly affected by the mix of companies in IPC’s survey sample, which changed slightly in January, but are kept constant through the remainder of the year.
Bare Circuits versus Assembly
Flexible circuit sales typically include value-added services such as assembly, in addition to the bare flex circuits. In October, the flexible circuit manufacturers in IPC’s survey sample indicated that bare circuits accounted for about 56 percent of their shipment value reported for the month. Assembly and other services make up a large and growing segment of flexible circuit producers’ businesses. This figure is also sensitive to changes in the survey sample, which may occur at the beginning of each calendar year.
Interpreting the Data
Year-on-year and year-to-date growth rates provide the most meaningful view of industry growth. Month-to-month comparisons should be made with caution as they may reflect cyclical effects. Because bookings tend to be more volatile than shipments, changes in the book-to-bill ratios from month to month may not be significant unless a trend of more than three consecutive months is apparent. It is also important to consider changes in bookings and shipments to understand what is driving changes in the book-to-bill ratio.
The information in IPC’s monthly PCB industry statistics is based on data provided by a representative sample of both rigid and flexible PCB manufacturers in the USA and Canada. IPC publishes the PCB Book-to-Bill Ratio and the PCB Statistical Program Report each month. Statistics for the previous month are not available until the last week of the following month.