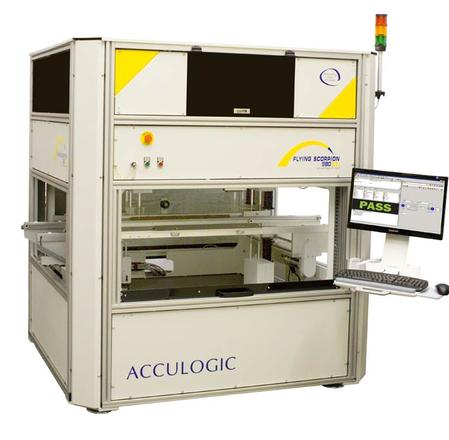 Flying Scorpion FLS940Sxi High-Performance Flying Probe Test System
WOBURN, MA - Acculogic, Inc. introduces the new single-sided low-cost version of its successful Flying Scorpion FLS900-series. The FLS940Sxi Flying Prober delivers the short programming times and high fault coverage of traditional bed-of-nails in-circuit test for prototype, ramp-up and low-volume/high-mix test applications.
“In-circuit testers that use bed-of-nails fixtures do not always deliver the optimum test strategy for every production environment,” said Greg LeBlonc, Product Manager for the Manufacturing Test Systems Division-Markham. “Even if the expense could be justified, the time to build and modify fixtures during prototype test and production ramp-up is simply too long. For very high-mix/low-volume environments, the cost of a bed-of-nails fixture cannot be justified. Acculogic’s Flying Scorpion solves these problems by eliminating the cost and cycle time of a bed-of-nails fixture.”
The FLS940Sxi adds a lower cost solution to the already powerful Scorpion Flying Probe Tester line. In addition to its no-compromise single-sided test capability, the system can be equipped with up to 10 variable or fixed-angle probe modules. The FLS940Sxi offers AccuFast™ drives as standard features and can be equipped with the ScanProbe™.
“We believe that the system’s low cost as well as ScanProbe™ and full integration of boundary scan, together with increased accuracy, dynamic response and reliability provided by the AccuFast™ technology will enable the Flying Scorpion to migrate more customers from in-circuit test to flying probers in the next two years,” said LeBlonc. With boundary scan-power fully unleashed, test coverage can be maintained at levels comparable to what is achieved on in-circuit testers and test cycle times will be held to acceptable levels for low-/medium-volume production.
The FLS940Sxi offers all the test capabilities of the double-sided FLS980Dxi in a single-sided configuration including:
According to Leblanc, “Traditional flying probers have several weaknesses including marginal reliability, expensive maintenance, inability to accommodate large boards and single-sided probing only. The Acculogic FLS900-series Flying Prober addresses all of these limitations, resulting in the best solution in the market.”
The Acculogic FLS940Sxi Flying Prober will begin shipping in January 2011. Availability is 6-8 weeks ARO.
Acculogic is a global supplier of automatic test equipment and application support services. Acculogic's test products include the Flying Scorpion - world’s only double sided Flying Probe with 3-D joy-stick-like probe motion and 22 probes , an extensive line of bed-of-nails In-Circuit Test Systems, a powerful suite of Boundary Scan test and programming tools, and Application Specific PXI/LXI based Functional Test Systems. Acculogic systems are used by manufacturers of electronic devices and circuit assemblies. Acculogic is a private, growing and profitable company with operations in United States, Canada, Mexico, Germany, France, Japan and an extensive network of sales and supports centers around the world.