To Mod an inkjet for PCB production

Like all of us, Ryan is tired of waiting for board production houses. To reduce some of that turnaround time, he modded an Epson inkjet into a PCB printer. The Instructable of his build is extremely thorough and it looks like he’s getting some quality boards out of his project.

The build started off by disassembling an Epson C86 printer he had lying around the house. Going with an Epson printer is important – Epsons have a piezo print head accepts ink that would clog other printers. After tearing all the plastic off his printer, Ryan set to work raising the printer (or lowering the bed, whatever) and was off to the races. 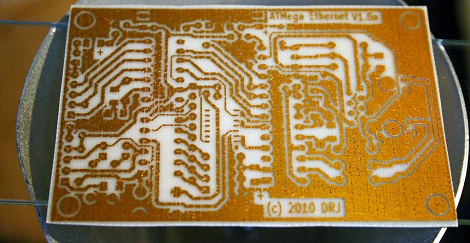 The cartridges were filled with etch-resistant yellow ink and a piece of copper clad put onto the printer. After printing, Ryan etched his board in ferric chloride. Sadly, he’s getting small pinholes in his traces where a bit of the ink was eaten during etching. He’s tried HCl and Peroxide, but those turn his boards into green junk.
If you’ve got any tips to help Ryan out, leave them in the comments. Before that, check out the printing demo Ryan put up.