Tips and Essentials for PCB Wiring

PCB wiring is one of the most difficult parts in PCB design process. Sometimes, experienced engineers may even be trapped in troubles when dealing with PCB wiring. Since they may worry the possible problems caused by improper wiring, it is hard for them to start wiring. However, there are skillful designers who have profound knowledge and can wire with self-created emotions spontaneously, making the wire quite beautiful and artistic.

Here are some good wiring tips and essentials:

The numbers of PCB layers can be divided into single, double and multi-layer, and single layer is now basically eliminated. Double-sided board is now frequently used in the sound system. The multi-layer board refers to the board with more than 4 layers (including 4 layers). Generally speaking, 4 layers PCB is suitable when the density of the components is not demanding. The vias can be divided into through-holes, blind holes, and buried holes. The through-holes are from the top layer directly to the bottom; blind hole is from the top or bottom of layer to the middle layer, and then do not continue, whose advantage is that the hole is not blocked totally, so other layers can still be traced; buried hole is buried in the middle layer and completely cannot be seen from the surface. The details are shown below: 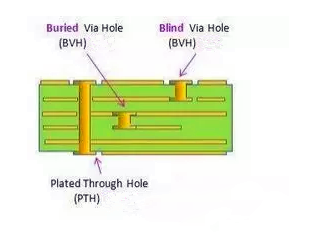 Before automatic routing, interactive wiring can be used in advance for the wires of relatively high requirements, and the sidelines of input and output ends should not be parallel, to avoid reflection interference. When necessary, the ground wire can be isolated, and the wiring of the two adjacent layers should be perpendicular to each other as the parallel is prone to parasitic coupling. The rate of automatic routing depends on good layout, so the rules can be pre-set, including the number of alignment, through-hole, stepping and so on. Generally, exploratory wiring comes first, and then fast connecting short wires, optimizing the routing path through the wiring of labyrinth which can break the wires as requirements and re-wiring to improve the overall wiring effect.

A recommended layout can be as shown below: 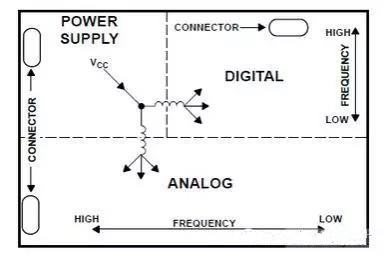 1.The power supply and ground wire

3. You can use a large area of copper for the ground line and make the vacancy in PCB board be connected with the ground.

2. The mix of digital circuit and analog circuit 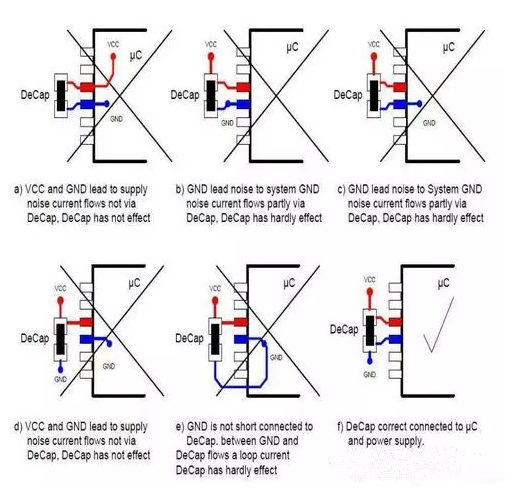 3. The treatment of trace corner

Generally speaking, the traces corner will bring the thickness changes. There will be some reflection when the thickness of wire diameter changes. If the corners are different, then the changes and influences of line thickness will be different, too. Hence, the choice of corner angle should be based on the signal sensitivity. Though fillet performs well but is hard to deal with in PCB design, then it is only used for those very sensitive lines. For the signals of average sensitivity, 45-degree angle will be suitable.

Generally speaking, we should not ignore the inspection process after completion, for whatever we do. Similarly, it is quite necessary to start the design rule check (DRC) when the PCB boards are finished. Only by carefully performing the check can we be more confident that the PCB board is qualified enough. We frequently check according to the following aspects:

1. Firstly, you should carefully check whether the following aspects are reasonable.

2. Check whether the width between power line and ground wire is appropriate.

Besides, you should also inspect if the power supply and the ground wire are tightly coupled, and find out if there is space available on the PCB board to widen the ground wire.

3. Whether the key signal line has been taken the best measure. For example, the

line length is set to the shortest, the protection line has been added and the input and output lines are clearly separated.

4. Whether the analog circuits and digital circuits have their own separated ground wires.

5. Check whether the graphics added to the PCB later (such as diagrams, note) will cause the short-circuit signal.

7. Whether break-away strips are added on the PCB board; whether solder mask and its size can meet requirement of production process; whether the character notes are pressed on the components. All these should be inspected carefully to prevent any influence on quality.

8. Check whether the outer edge of the power ground in multi-layer boards shrink or not. For example, the copper foil of power ground exposed outside the board is likely to cause a short circuit.

In short, the techniques and methods mentioned above are summed up from countless experiences, so it is very worthy to learn and then put into practice. If applied properly, those tips can help you quickly and effectively complete the PCB wiring. More importantly, regardless of PCB wiring and overall layout, you should be as careful as possible. After all, we do not want to see the final products become a waste merely caused by a very small mistake.

Practical! I will apply these tips into PCB wiring.