The Impedance and Wastage of The PCB, Which Are Easily Overlooked

The impedance and loss of the PCB is critical to the transmission of high speed signals, involving a range of factors as previously described. In order to analyze such a complex transmission channel, we can study its influence on the signal by transmitting the channel impulse response. The impulse response of the circuit can be obtained by transmitting a narrow pulse. The ideal narrow pulse should be a narrow pulse of infinitely narrow width and very high amplitude.

It seems that we have found a way to solve the problem, but in the real world, the ideal narrow pulse or infinite steep step signal does not exist, not only difficult to produce but also poorly controlled, so in the actual test more. The ground is tested using a sine wave to obtain a frequency domain response, and the time domain response is obtained by the corresponding physical layer test system software. Sine waves are easier to generate than other signals, and their frequency and amplitude accuracy are easier to control. 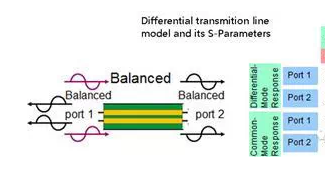 We can further obtain more information by performing inverse FFT transformation on these S parameters. For example, the SDD11 parameter transformation obtains the time domain reflection waveform (TDR: Time Domain Reflection), and the time domain reflection waveform can reflect the impedance variation of the measured transmission line. We can also inverse-FFT transform the SDD21 result of the transmission line to obtain its impulse response, so as to predict the waveform or eye diagram of the digital signal with different data rates after the pair of differential lines. This is very useful information for digital design engineers.

It can be seen that the vector network analyzer (VNA) is used to measure the transmission channel of the digital signal. On the one hand, the RF microwave analysis method is used, and the characteristics of the transmission channel can be obtained very accurately in the frequency range of several tens of GHz. On the one hand, by performing some simple time-domain transformation on the measurement results, we can analyze the impedance changes on the channel and the impact on the real signal transmission, so that digital engineers can judge the backplane, cable, and connectors, PCBs, etc. are good or bad, and you don't have to wait until the last signal goes wrong.