The Advantages of FPGA Technology

Since invention by Xilinx in 1984, FPGAs have gone from being simple glue logic chips to actually replacing custom application-specific integrated circuits (ASICs) and processors for signal processing and control applications. Why has this technology been so successful? This article provides an introduction to FPGAs and highlights some of the benefits that make FPGAs unique.

What Is an FPGA?

At the highest level, FPGAs are reprogrammable silicon chips. Using prebuilt logic blocks and programmable routing resources, you can configure these chips to implement custom hardware functionality without ever having to pick up a breadboard or soldering iron. You develop digital computing tasks in software and compile them down to a configuration file or bitstream that contains information on how the components should be wired together. In addition, FPGAs are completely reconfigurable and instantly take on a brand new “personality” when you recompile a different configuration of circuitry. In the past, FPGA technology could be used only by engineers with a deep understanding of digital hardware design. The rise of high-level design tools, however, is changing the rules of FPGA programming, with new technologies that convert graphical block diagrams or even C code into digital hardware circuitry. 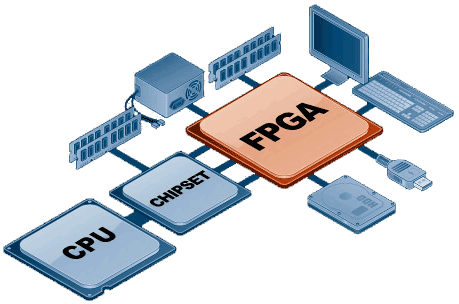 FPGA chip adoption across all industries is driven by the fact that FPGAs combine the best parts of ASICs and processor-based systems. FPGAs provide hardware-timed speed and reliability, but they do not require high volumes to justify the large upfront expense of custom ASIC design. Reprogrammable silicon also has the same flexibility of software running on a processor-based system, but it is not limited by the number of processing cores available. Unlike processors, FPGAs are truly parallel in nature, so different processing operations do not have to compete for the same resources. Each independent processing task is assigned to a dedicated section of the chip, and can function autonomously without any influence from other logic blocks. As a result, the performance of one part of the application is not affected when you add more processing.

Performance—Taking advantage of hardware parallelism, FPGAs exceed the computing power of digital signal processors (DSPs) by breaking the paradigm of sequential execution and accomplishing more per clock cycle. BDTI, a noted analyst and benchmarking firm, released benchmarks showing how FPGAs can deliver many times the processing power per dollar of a DSP solution in some applications. Controlling inputs and outputs (I/O) at the hardware level provides faster response times and specialized functionality to closely match application requirements.

Time to market—FPGA technology offers flexibility and rapid prototyping capabilities in the face of increased time-to-market concerns. You can test an idea or concept and verify it in hardware without going through the long fabrication process of custom ASIC design. You can then implement incremental changes and iterate on an FPGA design within hours instead of weeks. Commercial off-the-shelf (COTS) hardware is also available with different types of I/O already connected to a user-programmable FPGA chip. The growing availability of high-level software tools decreases the learning curve with layers of abstraction and often offers valuable IP cores (prebuilt functions) for advanced control and signal processing.

Cost—The nonrecurring engineering (NRE) expense of custom ASIC design far exceeds that of FPGA-based hardware solutions. The large initial investment in ASICs is easy to justify for OEMs shipping thousands of chips per year, but many end users need custom hardware functionality for the tens to hundreds of systems in development. The very nature of programmable silicon means you have no fabrication costs or long lead times for assembly. Because system requirements often change over time, the cost of making incremental changes to FPGA designs is negligible when compared to the large expense of respinning an ASIC.

Reliability—While software tools provide the programming environment, FPGA circuitry is truly a “hard” implementation of program execution. Processor-based systems often involve several layers of abstraction to help schedule tasks and share resources among multiple processes. The driver layer controls hardware resources and the OS manages memory and processor bandwidth. For any given processor core, only one instruction can execute at a time, and processor-based systems are continually at risk of time-critical tasks preempting one another. FPGAs, which do not use OSs, minimize reliability concerns with true parallel execution and deterministic hardware dedicated to every task.

Long-term maintenance—As mentioned earlier, FPGA chips are field-upgradable and do not require the time and expense involved with ASIC redesign. Digital communication protocols, for example, have specifications that can change over time, and ASIC-based interfaces may cause maintenance and forward-compatibility challenges. Being reconfigurable, FPGA chips can keep up with future modifications that might be necessary. As a product or system matures, you can make functional enhancements without spending time redesigning hardware or modifying the board layout.