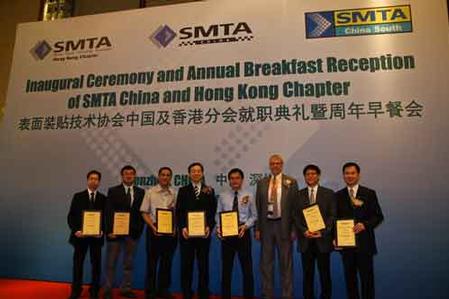 SMTA Hong Kong held its annual awards presentation at the SMTA Hong Kong Chapter Annual Breakfast Reception, which took place on Thursday, August 27, 2009 at the Shenzhen Ritz-Carlton Hotel.
Kenny Man, Senior Manager of NEC-Tokin Electronics HK Ltd., was named Officer of the Year. Kenny has provided great support for the SMTA Hong Kong Chapter for years, and is one of the pioneers of the Chapter. He successfully manages challenges and has contributed significantly to both administration and financial affairs.
Alfred Sham, Vice President of Computime Group Ltd., was awarded Individual Member of the Year. Alfred has been a very active member and has provided much support over the years to both the conference and training for SMTA China and the Hong Kong Chapter.
Sun East Technology (Holdings) Ltd. was named Corporate Member of the Year for its sponsorship of the SMTA Hong Kong Chapter. Sun East Technology has sponsored numerous conferences and golf tournaments for numerous years.
Reed Exhibitions (China) Ltd., Shanghai Branch was awarded Partner Sponsor of the Year. Reed Exhibitions has sponsored SMTA China Conferences and Meetings in conjunction with the NEPCON shows at Shanghai, Shenzhen and Tianjin for years. Reed is the biggest sponsor of SMTA China to date.
Olympic PCB was named Sponsor of the Year for sponsoring many SMTA Hong Kong Chapter events over the years, including the chapter’s annual dinner, golf tournament, and vendor conference.
APM Magazine was named Media Sponsor of the Year for providing tremendous support throughout the vendor conferences, annual reception and dinner, as well as the annual golf tournament sponsorship.