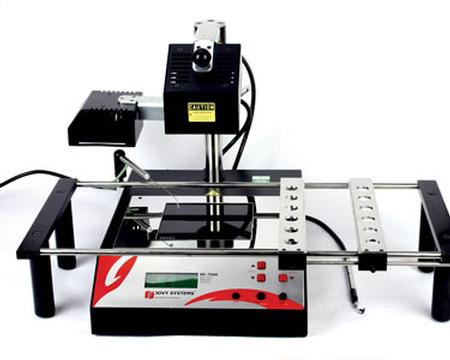 OLD TOWN, FL, March 16, 2009 AV Repair, the exclusive United States distributor for Jovy Systems, has announced that the Chinese manufacturer, Jovy Systems, has slashed prices on its flagship RE-7500, an IR BGA Rework Station that performs as well as systems costing thousands more. The new, lower cost of the RE-7500 BGA Rework System is hoped to now be within the reach of those servicers that were opting for the lower cost hand held hot air systems. "With prices this low, it's hoped that servicers will now be able to afford this technology that was once out of reach for many servicers says Cameron Boyd- President of AV Repair. Service centers typically use hand held hot air stations to rework circuit boards, but these inexpensive systems always fell far short of standalone BGA Rework stations. With the RE-7500 BGA Rework System at a price of $1995.00, it makes sense to invest in this new technology, versus that of either replacing circuit boards that contain BGA's, or having the circuit boards sent out for the reworking process- either of which brings higher costs, and unnecessary delays.
Jovy's RE-7500 BGA rework system is a nozzle-free unit that utilizes German infrared technology that, unlike many IR's, doesn't require a light bulb. This system can be used to rework and reflow all BGA and SMD devices including: BGA, CBGA, CCGA, CSP, QFN, MLF, PGA and all epoxy underfilled BGA's. Being that the system does not use hot air, it can remove plastic components without any damage, and does so without disturbing any nearby components.
There really isn't another BGA rework system on the market in this price range. Typically, to get a complete system of this quality with this many extras included, you'd end up spending more than three times the amount of an RE-7500. And now with this new lower pricing, a real BGA rework station is now within the reach of those that thought they couldn't afford it. Adds Cameron Boyd. And now, we've teamed up with a new leasing company to make the Jovy Systems Rework Station even more affordable.
The RE-7500 comes complete with a precision X-Y table, along with an on-board pre-heater, a built-in air pick, laser sighting, a built-in temperature sensor with digital monitoring, and a built-in cooling system. The RE-7500 can connect to your laptop or PC, which allows remote operation of all functions. This interface also incorporates profiles that you can create and edit, and then upload directly to the RE-7500. This allows for consistent results time after time. Profiles are an easy way to adjust all phases of the rework processes, including pre-heating, soaking, re-flow and cooling stages.
AV Repair also offers several BGA reballing kits, which incorporate all the necessary jigs and masks to remove and reball just about any BGA IC on the market today. One of these kits - a special edition - which contains 3 BGA masks for servicing Microsoft's XBox360, which is notorious for having cold solder on 3 of its BGA IC's. Symptoms include: Two flashing lights, and the notorious ring of death, or RRoD. This special edition three mask set allows servicers to repair 99% of all affected units.
About AV Repair:
With more than 40 years collective experience in the audio/visual repair field, AV Repair and its team of knowledgeable technicians are fully capable to repair broadcast and professional decks and cameras, as well as consumer camcorders and Sony digital cameras. AV Repair is the sole U.S. distributor of the Jovy Systems' RE-7500 rework system and accessories.