It also puts higher requirements on the PCB board process. After communication with the PCB factory and combined with the use of EDA software, the impedance of the trace is controlled according to the signal integrity requirements. Different routing methods can be calculated to obtain the corresponding impedance values.

In order to perform good impedance control on the PCB, we must first understand the structure of the PCB:

Generally speaking, the multi-layer board is made by laminating and laminating the core board and the prepreg. The core board is a hard, special thickness, two-bread copper sheet, which is the basic material for the printed board.

The prepreg constitutes a so-called wetting layer which acts to bond the core sheet, although it also has a certain initial thickness, but its thickness will change somewhat during the pressing process.

The inner copper foil is the copper coated on both sides of the core board, and the final thickness is very small from the original thickness, but due to etching, a few um is generally reduced.

The outermost layer of the multilayer board is a solder mask, which is what we often call "green oil". Of course, it can also be yellow or other colors. The thickness of the solder mask is generally not easy to determine accurately. The area without copper foil on the surface is slightly thicker than the area with copper foil.

However, because of the lack of thickness of copper foil, the copper foil is still more prominent when we use You can feel it when you touch the surface of the printed board with your fingers.

When making a printed board of a certain thickness, on the one hand, it is required to reasonably select the parameters of various materials. On the other hand, the final forming thickness of the prepreg is also smaller than the initial thickness.

Different PCB manufacturers, PCB parameters will have subtle differences, through the communication with the circuit board factory technical support, get some parameters of the plant.

Surface copper foil: There are three types of surface copper foil materials that can be used: 12um, 18um and 35um. The final thickness after processing is approximately 44um, 50um and 67um.

Core board: Our commonly used plates are S1141A, standard FR-4, two bread copper, and the available specifications can be determined by the manufacturer.

At least one prepreg can be used, but some manufacturers require at least two. If the thickness of the prepreg is insufficient, the copper foil on both sides of the core can be etched away and then adhered on both sides with a prepreg, so that a thicker wetting layer can be achieved.

Wire cross section: We would think that the cross section of the wire is a rectangle, but it is actually a trapezoid. Taking the TOP layer as an example, when the thickness of the copper foil is 1 OZ, the upper bottom side of the trapezoid is 1 mil shorter than the lower bottom side.

Introduction to the tool for impedance calculation:Once we understand the structure of the multi-layer board and master the required parameters, the impedance can be calculated by the EDA software. You can use Allegro to calculate, but here is another tool, Polar SI9000, which is a good tool for calculating characteristic impedance, which is now used by many PCB manufacturers.

Whether it is a differential line or a single-ended line, when calculating the characteristic impedance of the inner signal, you will find that there is only a slight difference between the calculation result of Polar SI9000 and Allegro, which is related to some details of the processing, such as the cross section of the wire. shape.

But if you are calculating the characteristic impedance of the surface signal, I suggest you choose the Coated model instead of the Surface model, because the model considers the existence of the solder mask, so the result will be more accurate. The following figure is a partial screenshot of the differential line impedance of the lower layer in the case of considering the solder mask with the Polar SI9000: 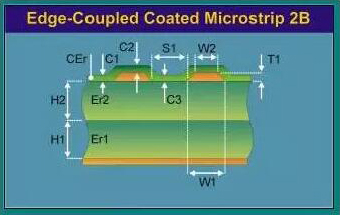 Since the thickness of the solder mask is not easy to control, it is also possible to use an approximate method based on the recommendations of the board manufacturer: subtract a specific value from the results calculated by the Surface model. It is recommended to subtract 8 ohms from the differential impedance and reduce the single-ended impedance. Go 2 ohms.

There are two parallel ways: one for the two lines walking on the same side-by-side, and the other for the two lines walking over the top-by-side. Generally, the latter is used as the interlayer differential signal, because in the actual processing of the PCB, the alignment accuracy between the laminates is much lower than that of the same layer, and the dielectric loss during the lamination process cannot be Ensure that the spacing of the differential lines is equal to the thickness of the interlayer dielectric, which will cause differential impedance variations between the differential pairs between the layers. It is recommended to use the difference in the same layer as much as possible.