Pad is the basic constituent elements of the surface mount assembly used to form the land pattern of the circuit board, that is, various combinations of pads designed for special component types. There is nothing more frustrating than the poor design of the pad structure. When a pad structure is not designed correctly, it is sometimes difficult and sometimes impossible to achieve the desired weld point. Pad in English has two words: Land and Pad, which can often be used interchangeably; however, in function, Land is a two-dimensional surface feature for surface mount components, while pad is a three-dimensional feature. As a general rule, land does not include plated through holes (PTH, plated through-hole). Bypass holes (via) are plated through holes that connect different circuit layers. The blind via connects the outermost layer with one or more inner layers, and the buried bypass holes are only connected to the inner layer. 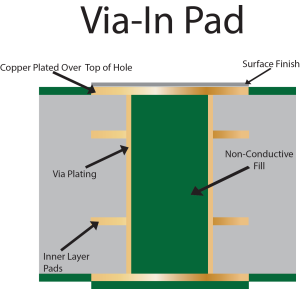 As noted above, the land typically does not include electroplated through-holes (PTH). The PTH in a pad Land will take a considerable amount of solder during the welding process, in many cases, it will bring solder pads that are insufficiently solder-able. However, in some cases, the PCB design component wiring density forces to change this rule, the most noteworthy is the chip size of the package At a distance less than 1.0 mm (0.0394 "), it is difficult to route a wire through the" maze "of the pad. A blind bypass hole and a micro-side hole are created in the pad, allowing direct wiring to another layer because these bypass holes are small and blind. They do not absorb too much solder, resulting in little or no effect on solder joints.