Made a prototype circuit board

Last week I got the idea that I wanted to build a prototype circuit board that would tell me when to water my plants. I got the idea from an interview I did with Massimo Banzi (co-founder of Arduino).
He mentioned a project where an Arduino was used for checking if a plant needed water, and if it did it would tweet about it. I thought that was pretty cool, but realized that this could be made much simpler. All I need is a reminder that my plants need water when I am close to the plant.
So I decided I wanted to make the same thing but instead of tweeting, a LED would light up to remind me. Also, to make it cheap, I decided to make it out of just a few discrete components.I talked about this idea to my Mastermind group and they told me that it would be really cool if I videotaped the process so that people could see how such a process is done. So that is what I did.
Read more on how to create circuit boards yourself

The First Circuit Board Draft

I have learned a lot of electronics theory while attending University, but I have not used it that much. So my first idea was that I could make the prototype circuit using a resistor, a probe to put in the soil of the plant and a LED. I would use the resistor and the probe in the soil as a voltage divider and use the output voltage to light the LED. 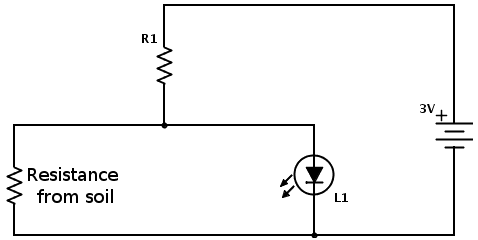 I was sitting at my desk at home, ready to start the project. Then I encountered my first problem. I did not have any resistors lying around at home. Luckily I found an old circuit board with resistors. So I desoldered the resistors from it and decided to try to make the circuit using those resistors.
But, after soldering a few of the parts I quickly realized that because of the high resistance in the soil when it is dry, I would need a large second resistor and thus would not get enough current to power the LED. I knew it couldn’t be that easy.

The Second Circuit Board Draft

So I figured I needed to add a transistor to the prototype circuit board and started drawing a new circuit: 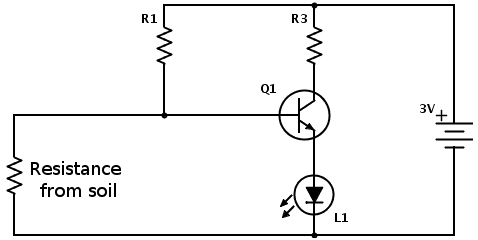 I found an old and used stripboard, put the components in place and started to solder. The smell of solder smoke filled the room.I used a BC546 transistor and powered it up. But still I could not get enough current to power the LED.”Hmm.. What to do?”, I thought to myself. “Well, add another transistor of course!”

A Prototype Circuit Board That Works!

With another transistor in place I tried again. Still no luck. I did some calculations, then realized that I could increase the voltage a bit. Since I wanted it to be powered from AA batteries I could provide it with either 4.5 V (3 batteries) or 6 V (4 batteries). After some testing I found that I needed four batteries to make it work.Here is the final schematics:

Note that this is a prototype and not an optimized design. Things like battery consumption and calibration can be improved a lot.

With a working prototype circuit board safely placed on my desk I decided to make the prototype more usable. So I cut it to make it easy to place in the soil of a plant. 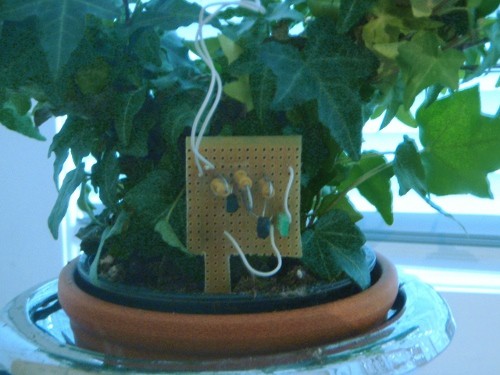 I brought the circuit over to Morten Hake’s house because I knew he had some dry plants. I tested it and it worked flawlessly!