[Mike Harrison] talked about designing and building a huge scale LED lighting installation in which PCBs were used as both electrical and mechanical elements, and presented at Electromagnetic Field 2016. The project involved 84,000 RGBW LEDs, 14,000 microcontrollers and 25,000 PCBs. It had some different problems to solve compared to small jobs, but [Mike] shared techniques that could be equally applied to smaller scale projects or applications. He goes into detail on designing for manufacture and assembly, sourcing the parts, and building the units on-site. 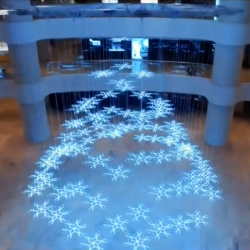 The installation itself was a snowflake display for a high-end shopping mall in Hong Kong in the 2015 Christmas season. [Mike] wanted a small number of modular boards that could be connected together on-site to make up the right shapes. In an effort to minimize the kinds of manufacturing and parts needed, he ended up using modular white PCBs as structural elements as well as electrical. With the exception of some minor hardware like steel wire supports, no part of the huge snowflakes required anything outside of usual PCB manufacturing processes to make. The fewer suppliers, the fewer potential problems. [Mike] goes into design detail at 6:28 in the video.
For the connections between the boards, he ended up using SIM card connectors intended for cell phones. Some testing led to choosing a connector that matched up well with the thickness of a 1.6mm PCB used as a spacer. About 28,000 of them were used, and for a while in 2015 it was very hard to get a hold of that particular part, because they had cleaned everyone out! 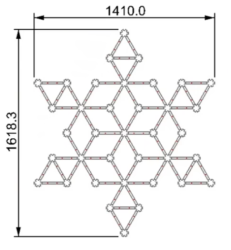 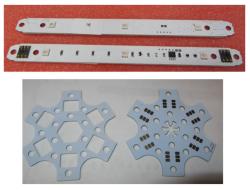 A small number of different modular PCBs made up the bulk of the installation. With the exception of some formed steel wire for support, all parts were made using normal PCB manufacturing methods. 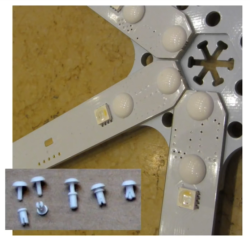 In between each of the visible rivets is a SIM card connector taking care of the contacts between boards.
About half-way through the video (10:55) [Mike] goes into microcontroller and firmware details. The PIC12F1501 turned out to be a great fit for reasons that included cost, wide operating voltage range, 10-bit PWM for each of Red, Green, Blue, and White, and the low cost of having Microchip program the firmware in at the factory. RGBW LEDs were chosen for a number of reasons, but mainly because the white generated is much more visually consistent across a large display (compared to lighting each of the RGB elements to make white.) He made sure that it was easy to reprogram the firmware across all units easily if needed, because updating thousands of microcontrollers one at a time is just not an option.
Video of the presentation is embedded below, but if you want to go straight to some video of the finished installation, it starts at 21:38.
Using PCB material as a structural component has a lot of potential. We’ve seen it in this clever tiny 7-segment display, and more recently in PocketNC’s FR4 Machine Shield. If you’re interested in trying it yourself, you can learn all about the finer points of how to use FR4 for enclosures.