How to obtain complete electromagnetic information of PCB?

Traditional tools for debugging PCBs include: time-domain oscilloscopes, TDR (time-domain reflection measurements) oscilloscopes, logic analyzers, and spectrum analyzers in the frequency domain, but none of these means give a reflection of the overall PCB information data. This article describes how to use EMSCAN electromagnetic interference scanning system to obtain PCB complete electromagnetic information, and describes how to use this information to help design and debugging.

EMSCAN has spectrum scanning and space scanning function. The result of the spectrum scan allows us to have a general idea of the frequency spectrum generated by the EUT: how many frequency components there are, and how much the magnitude of each frequency component is. The result of spatial scanning is for a frequency point, is a color representative of the amplitude of the topographic map, we can see in real time the dynamic distribution of the electromagnetic field for a frequency point generated by PCB.

When the spectrum / space scan function is performed, the working PCB is placed on the scanner, and the PCB is divided by the grid of scanner into 7.6mm and Timm (small cell with a H field probe). After full-band scan for each probe (frequency ranges from 10k Hz-3G Hz), EMSCAN will give out two pictures. Only perform spectrum / spatial scan for once, you can get the electromagnetic radiation information for all frequencies.

Locate the source of electromagnetic interference

The use of spectrum analyzers and a single near-field probe can also locate "interference sources". Far-field test (EMC standard test) can be compared to "fire detection". If the frequency point is beyond the limit, it is considered as "found a fire." The traditional "spectrum analyzer + single probe" program, generally are used by EMI engineers to detect " the flames is sprang out from which chassis ". To detect the flames, the general EMI suppression method is to use shielding and filtering, the "Flames" is put out inside the product. EMSCAN allows us to detect the source of interference - "fire", but also to see "fire", that is, the spreading way of the source of interference. 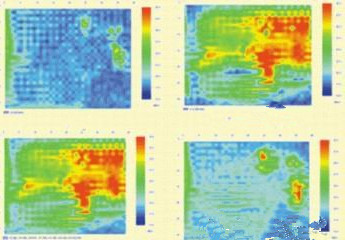 When check the whole EMI problem with EMSCAN, generally the process is tracking from "flames" to "fire". For example, first scan the chassis or cable, check the interference is from which part, and further track the product inside, which PCB generates interference, and then track the devices or layout.