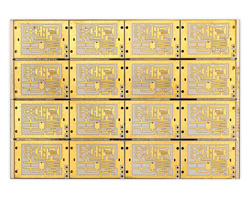 1. In the high-speed PCB design, the blank area of signal layer can be deposited copper, and how to allocate ground and power supply of copper in multiple signal layers?
Generally in the blank area of copper is grounded. Only coppering next to the high-speed signal line should you pay attention to the distance between the copper and the signal line, because the deposited copper will reduce the characteristic impedance of the trace. You should also be careful not to affect the characteristic impedance of its layer, such as in the structure of the dual strip line.
2. Is it possible to calculate the characteristic impedance using the microstrip line model on the signal lines above the power plane? Is the signal between the power supply and the ground plane available using the stripline model?
Yes, the power plane and the ground plane must be considered as a reference plane when calculating the characteristic impedance. For example, the four-layer board: the top layer - the power layer - the ground layer - the bottom layer, then the characteristic impedance model of top layer is microstrip line model referring to the power plane.
3. Is automatically generated test points on a high-density PCB possible to meet the test requirements for mass production in general?
You must check whether the specification of the test points meet the requirements of the test equipment. In addition, if the alignment is too close and the test specification is more stringent, there may be no way to automatically add test points to each line. Of course, you need to manually fill the place to be tested.
4. Will adding test points affect the quality of high-speed signals?
It depends on the way to add the test point and how fast the signal in the end. Basically an additional test point may be added to the line or a short line be pulled out from the line. The former is equivalent to a small capacitor with line; the latter has one more branch. These two cases will more or less have influence on the high-speed signal, and the degree of impact is related to the signal frequency and signal edge rate. The impact can be known through simulation. In principle, the test point should be smaller and branch is as short as possible.
5. For the system composed by a number of PCB, how to connect the ground wires of each PCB board?
When the signals or power connected between the individual PCB board are working, if the board A transmits power or signal to the board B, an equal amount of current will flow back from the ground layer to the board A (Kirchoff current law).The current on the ground layer will go back to the place where impedance is minimal.
Therefore, the number of pins allocated to the ground layer cannot be too small to reduce the impedance at the interface where the power supply or signal is connected to each other, thus reducing the noise on the ground layer. In addition, it is possible to analyze the entire current loop, especially the larger current section, to adjust the connection of the ground layer to control the current path (for example, to make a low impedance somewhere so that most of the current flow from here), reducing the impact on other sensitive signals.
6. Can you introduce some foreign technical books and data on high-speed PCB design?
Now high-speed digital circuit applications are communication networks, calculators and other related fields. In the communications network, PCB board operating frequency has reached GHz up and down; the number of layers as I know is as much as 40. For calculator-related applications, whether it is a general PC or server, the board's maximum operating frequency has reached 400MHz (such as Rambus) or more, thanks to the progress of the chip, In response to this high-speed, high-density routing requirements, blind/buried vias, mircrovias and build-up process requirements are increasing. These design requirements can be satisfied by many manufacturers.
7. Two characteristic impedance formulas:
microstrip Z={87/[sqrt(Er+1.41)]}ln[5.98H/(0.8W+T)]
W is the line width, T is the thickness of the copper, and H is the distance from trace to the reference plane, and Er is the dielectric constant of the PCB material. This formula must be applied in the case of 0.1 <(W / H) <2.0 and 1 <(Er) <15.
stripline Z=[60/sqrt(Er)]ln{4H/[0.67π(T+0.8W)]}
H is the distance of the two reference planes and the trace is in the middle of them. This formula must be applied at W/H <0.35 and T/H <0.25.
8. Is it possible to add ground wire to the middle of the differential signal line?
The ground wire is generally not added in the middle of differential signal. Because key of the application of differential signals is taking advantage of the benefits brought about by the coupling between differential signals, such as flux cancellation, noise immunity and so on. If the ground wire is in the middle, it will destroy the coupling effect.
9. Does the rigid-flex board require dedicated design software and specifications? Which domestic circuit board manufacturers can undertake such processing?
Flexible Printed Circuit can be designed with software that typically designs PCBs and the Gerber format will be sent to the FPC manufacturers. As the manufacturing process is different from this of the general PCB, each manufacturer will have different requirement of the minimum line width, minimum line distance and the smallest aperture (via) based on their manufacturing capacity. In addition, at the turning point of flexible circuit board, some copper should be added to reinforce. As for the manufacturers, they can find by keyword query accessing the "FPC".
10. What is the principle of properly selecting the point where the PCB is connected to the housing?
The principle is provide a low impedance path to the return current and to control the path of the return current by chassis ground. For example, usually in the vicinity of high-frequency devices or clock generators, connecting PCB ground and chassis ground by fixed screw, in order to minimize the entire current loop area, namely, and to reduce the electromagnetic radiation.