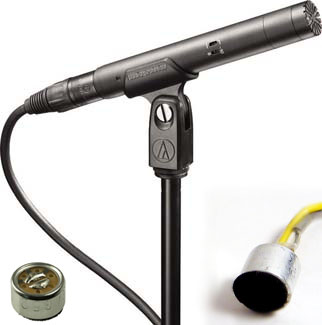 COND MIC,
need often arises for a sensitive sound pick-up device, whether it is to be used as a simple microphone or a more exotic device as a sound operated alarm, a bugging device or a sound operated flash (for stop action photography) the list is quite unending.
The circuit given employs a condenser microphone as the transducer. Since output of the condenser microphone is quite low, it usually has an FET amplifier built into the case. 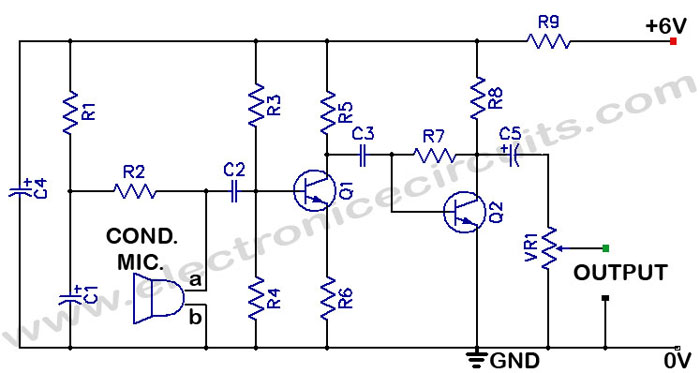 This amp is powered by the R1, R2 resistor network.
The output of condenser microphone is fed to a two stage amplifier. Transistor T1 (BC149C) utilising current series feedback forms the first stage. The second stage comprising transistor T2 (BC147B) is connected in the voltage shunt feedback configuration. These two stage provide sufficient gain to pick up even the slightest whisper.
The circuit requires a 4.2 volt supply.This may be obtained, as in the prototype, with a 1kΩ (R9) resistor as shown in the diagram. The value of this resistor may be altered. to suit a supply voltage other than 6 volts. 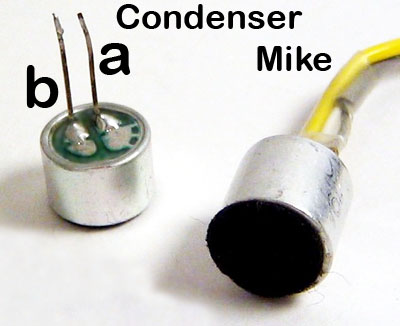 Condenser Mike Pin Configuration
Output of the microphone amplifier can be made variable by connecting a 10kΩ potentiometer / Preset as shown.
Circuit’s gain can be increased by reducing the value of R6 to 47Ω or 22Ω, depending on the input sensitivity of the main amplifier system. Increase in gain was also observed by using 3V supply and eliminating R9 altogether. The microphone should be housed in a small round enclosure.