1. Layout is in accordance with the circuit module. The relevant circuit achieving the same function is a module; the components in circuit module should be used in the nearby centralized principle, while digital circuits and analog circuits will be separated;

3. The bottom of sleeper resistance, inductance (plug-in), electrolytic capacitors and other components should avoid through-hole, preventing the short circuit between through-hole and component shell after wave soldering;

4. The distance between the outer side of the component and the board edge is 5 mm;

5. The distance between the outer edge of mounting element pad and the outside of the adjacent components is more than 2 mm; 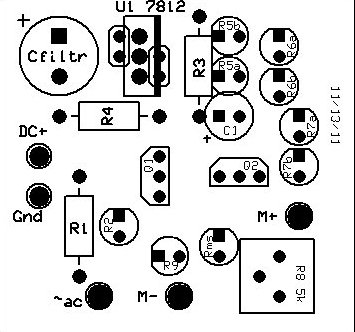 7. Heating components cannot be close to the wire and thermal components; high thermal devices should be balanced evenly;

9. The layout of other components

All the IC components are aligned side by side; the polarity of the components should be marked clearly but shouldn’t be in more than two directions in the same printed circuit board, or the directions need to be perpendicular to each other;

10. The board wiring should be well-balanced and should be filled with mesh copper when the density difference is too large, and the gridding is more than 8mil (or 0.2mm);

11. The pad cannot have through-hole to avoid the poor solder paste in components. Important signal lines are not allowed to pass through the socket feet;

12. Pay attention to patch unilateral alignment and the character direction and packaging direction should be consistent;

13. The polarity mark of the device in the same board should be as much as possible consistent. very clear, but should be more detailed.