Want to build a Raspberry Pi Controller? You got it:

The Raspberry Pi (RPi) is a powerful single board Linux computer that allows a variety of programming projects and electronic devices to be created. This is a part one in a series of Raspberry Pi projects. With an accessible GPIO (General Purpose Input Output) dual inline female header connector, a variety of electrical, electronic, and electromechanical components and devices can be wired to the Raspberry Pi. In addition, the RPi has support features like audio, HDMI, composite video, camera, USB, and LCD devices using standard elecrical connectors, audio, and RCA phono jacks. Connecting to the web is easily accomplished by way of a standard Ethernet connector. To bring your maker devices to life, the RPi uses the Python programming language, which comes standard with the Debian Linux distro operating system installed on the SD card. In this introductory project to building RPi electronic controllers, you'll learn how to wire a programmable tactile based pushbutton switch to the RPi and read its status using a basic Python script

After the linux installation command is entered, you will see a series of RPi.GPIO bulld-installation file sequences being displayed on the monitor as shown below. 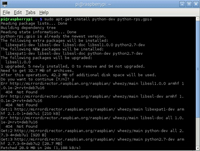 Once the build is complete, the RPi is ready for reading the status of a tactile pushbutton switch.

Wiring the Tactile Pushbutton Switch to the RPi 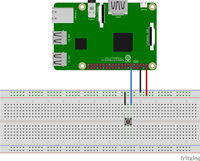 As an additional project build material, I included an equivalent circuit schematic diagram for reference below. 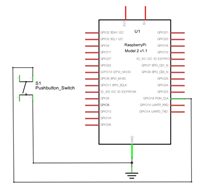 Although, the circuit wiring to the RPi is quite simple, recheck the wiring before programming the RPi. This important verification step will assure you project execution success when the python code is installed and running on the RPi.

You can entered this script using either the LXTerminal's nano editor or with the Python's IDLE (Integrated Development Enviroment). Save the script as pbbutton.py in the home/pi directory of the RPi. Next, type the following linux command to run the script on the RPi into the LXTerminal as shown next.

The tactile pushbutton switch can easily be programmed to provide a variety of output messages and switching responses. Try changing the "Button Press" message to display your name or a whimiscal word when activating the switch. Record your results in a laboratory notebook.